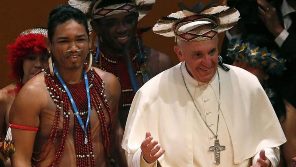 Bergoglio at the Amazon Synod 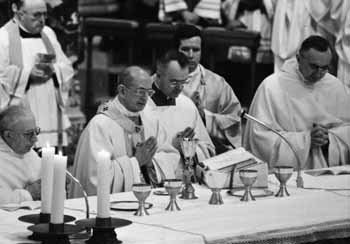 While neocons and semi-traditional Catholics are outraged at the goings on at the Amazon Synod most of them have forgotten, or are ignorant of the fact that Bergoglio’s pagan confab is taking place fifty years after one of, if not the worst episode in the Church’s history – the promulgation of Paul VI/Montini’s Novus Ordo Missae. While there has been considerable handwringing over the ghastly events taking place at the Synod, few if any understand that it is the consequence of Paul VI/Montini’s New Mass and the abominable Council which spawned it, Vatican II.

With hindsight of a half century, it is abundantly clear that the Second Vatican anti-Council (1962-65) was the foundation upon which a new religion was concocted that replaced the Traditional Catholic Faith of two millennium. A new religion, of course, needs a liturgy and worship service which expresses its doctrines and beliefs – lex orandi, lex credendi. Paul VI/Montini’s New Mass and the subsequent changes to it fulfilled the needs of the Conciliar Faith and paved the way for the false ecumenism of the past half century, the latest horrific demonstration of which is on display at the Amazon Synod.

Criticism of the actions of Bergoglio and his fellow Marxists/Modernists henchmen will come to nothing since the issue is not with the Amazon Synod itself, but instead, is with doctrine. The New Mass and the ideas expressed at Vatican II are of a New Religion. It is ideas which shape actions – and those of Paul VI/Montini’s Mass are not of the Traditional Catholic Faith.

Amazing but quite telling is that those who are up in arms at the current freak show taking place in Rome still do not see the fundamental problem. Despite the fact that traditional Catholic scholarship* has conclusively shown that the New Mass is invalid and confers no sanctifying grace, most of those who are decrying Bergoglio’s latest scandal continue to recognize the New Mass as legitimate.

In his study of the Crusades, Hilaire Belloc contended that after the First Crusade the subsequent efforts to liberate the Holy Land were “rear-guard action[s] of a defeat.” The follow-up expeditions did not have as great a commitment either spiritually, militarily, or economically to accomplish their goals as did the first undertaking:

But they did not recover it. They failed. That is, they

failed after the success of the First or Great Crusade,

which took Jerusalem in 1099 A.D. and then held out in

the Holy Land for 50 years. But the disaster came at Hattin

guard action of a defeat.’

As Belloc so insightfully points out, the latter Crusades did not address the central obstacle which ultimately prevented them from success. From a military viewpoint it was the failure, in large part, to secure Damascus that eventually led to the downfall of the Latin Kingdom.

Analogously, the critics of the Synod are fighting a “rear-guard action” in opposing a symptom instead of the disease. The victory of the Modernists at Vatican II and the promulgation of Paul VI/Montini’s Mass is like the defeat of the Crusader states at Hattin. Lamenting over the defeat at Hattin or complaining about the blasphemous actions of Newchurch will not lead to change.

Catholics bewailing the antics taking place at the Amazon Synod will fail in their goal, like the Crusaders did in their repeated attempts to dislodge the Muslims, unless they focus their efforts on the ultimate cause. The Conciliar Church is in severe decline, attacking it at its core will accelerate its most necessary demise. Tying the atrocities taking place at the Synod to the phony Mass of Paul VI/Montini and Vatican II will call into question the entire legitimacy of Newchurch.

That little has been made in neoconservative circles on the infamous anniversary of Paul VI/Montini’s New Mass shows once again why the resistance to the Conciliar Church has gone virtually nowhere. Because of this, expect more and even greater blasphemous events like the Amazon Synod to take place.